Self Powered Electric car for Africa

Self Powered Electric Car-Solution to Range Anxiety for eV

Now you can drive electric car with peace of mind. No more range anxiety, power is always available, The self charging device generates excess energy and store, and will use it to recharge itself. 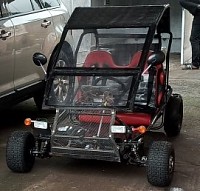 Self Powered Electric Car for Africa

The Self powered Electric car for Africa is the latest technology in the staple of Glyms Industries Ltd, Filed for Patent at USPTO.

Africa technological breakthrough mostly is hindered by epileptic power supply, making it more difficult to operate most electric cars in Africa. If charging stations are built and install in most African Countries, availability of power to run such station becomes the real big problem, hence operating electric cars in most African Countries becomes cumbersome and uninteresting.

It becomes necessary to invent an Electric car system that can solve this problems for Africans. Even in developed Countries where such charging stations are available, "Range anxiety" becomes a problem, because electric car batteries may deplete in locations where there are no charging stations.

The new Technology developed by Glyms Industries is fully computerized, using AI technology. The electric car working prototype lithium batteries occupies only a small space, and stores excess energy for its future use when the main lithium batteries depletes due to usage, a fully charge battery, even though small can have a range of 80-100km, and fully charge itself within 3-5 mins to continue its trip without the need for charging stations. and can go up to 95km/h. This is just a small prototype built to test the system. And can be scaled up by extrapolation of the working prototype. We have taken the lead.